The DAWNDINOS research team works within the Structure & Motion Lab at the Royal Veterinary College and is based at its Hertfordshire campus. The SML addresses key questions about how living and extinct animals are structured, how they move, how movement is controlled and what limits performance.

John is a biologist originally from the USA who now resides in the UK as a dual citizen, and a Professor of Evolutionary Biomechanics at The Royal Veterinary College. He received his BS degree in Zoology at the University of Wisconsin in 1993, then obtained his PhD in Integrative Biology at the University of California with Kevin Padian in 2001, and rounded out his training with a two-year National Science Foundation bioinformatics Post Doc at the Biomechanical Engineering Division of Stanford University with Scott Delp. John started at the RVC as a Lecturer in Evolutionary Biomechanics in 2003 in the Department of Veterinary Basic Sciences and was promoted to Reader in 2008, then Professor in 2011.

His interests are in the evolutionary biomechanics of locomotion, especially in large terrestrial vertebrates. He’s studied birds, extinct dinosaurs and their relatives, elephants, and crocodiles and looks at how locomotion works in individual species in order to reconstruct how locomotion has evolved across vast phylogenetic spans. In particular he’s interested in how body size influences locomotor abilities and how anatomy and function are related (or not). John has worked with a wide range of land vertebrates, and uses as many techniques as his team can muster. Dinosaurs (including birds), elephants, crocodiles, early tetrapods and more species have been favourite subjects of his research.

John is an Associate Editor for Proceedings of the Royal Society B (Biological Sciences),  the new open access journal PeerJ, and the ISRN Evolutionary Biology journal. From 2012-2013 he was a Senior Research Fellow funded by the Royal Society Leverhulme Trust. He won the Society for Vertebrate Paleontology’s Romer Prize (2000), and was elected Fellow of the Linnean Society and Society of Biology, and was awarded the Charles Darwin lecture at the British Science Festival in 2012 as well as the RCVS Share Jones Lecture in Veterinary Anatomy in 2011.

Krijn did his MSc in Marine Biology in 2010 at the University of Groningen, where he was involved in research studies on filter feeding in Ghost Shrimp. He also studied the effect of knocking out the lateral line sensory system in swimming Golden Shiners, under the supervision of Dr Matthew McHenry at UC Irvine.

His interest and collaborations led him to pursue a PhD in the Functional morphology at the University of Antwerp supervised by Dr Sam Van Wassenbergh and Prof Peter Aerts. He studied the biomechanics involved in the fish feeding system, in fish known to feed on land.

Krijn joined the RVC’s structure and motion lab in December 2015 to aid in the study of locomotion and morphology in salamanders. Currently, Krijn is a post doctoral researcher working on the DAWNDINOS project. 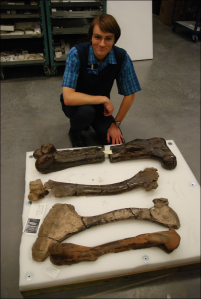 Peter is a self-confessed incurable ‘dino-nut’ having been fascinated by dinosaurs and other prehistoric animals for as long as he can remember. After completing his undergraduate studies in Geoscience at Queensland University in Australia, he combined his passion for palaeontology and mathematics in his PhD work at Griffith University, which focused on locomotor biomechanics in theropod dinosaurs. He has been actively involved with the Queensland Museum (Brisbane, Australia) since 2007, and has studied many extinct animals ranging from freshwater crustaceans to stem tetrapods, lizards and dinosaurs (avian and non-avian). Peter is particularly interested in integrating biomechanics with data from fossils, using a rigorous, physics-based approach to examine the adaptive significance of evolutionary changes in the vertebrate skeleton.

Peter joins the DAWNDINOS project in March 2018 as a Postdoctoral Researcher and we welcome him to the team!

Bishop, P. J. 2014. The humerus of Ossinodus pueri, a stem tetrapod from the Carboniferous of Gondwana, and the early evolution of the tetrapod forelimb. Alcheringa 38: 209–238.

Louise is the research administrator working on the ERC funded DAWNDINOS project and provides project management to support the research team on a wide range of activities. She is responsible for reporting on  project progress to the European Research Council, organising science outreach events and maintaining the team’s website. Louise has a background in project management and knowledge transfer within a research environment having previously worked in a similar capacity in the RVC‘s Pathobiology and Population Sciences dept. Louise has a BSc and Master’s degree in human & animal nutrition from Kings College, London.

Ashleigh did her MSc in Human Anatomy and Evolution 2015 at the Hull York Medical School, where she was involved in a project analysing craniodental biomechanics of primate mastication.Her interest in biomechanics led her to pursue a PhD in evolutionary biomechanics of locomotion in hominins at Liverpool John Moores University. She studied human substrate navigation using a range of kinematic methods and reconstructed hominin limb posture from fossilised footprints.She is actively involved in a number of external projects focusing on functional morphology of both footprints and the foot. Ashleigh is particularly interested in simulating locomotion from fossil data.

Romain has always been passionate about the evolutionary history of archosaurs and especially dinosaurs. After studying Geosciences, he obtained his MSc in Palaeontology and Evolutionary Biology from the Paris Muséum National d’Histoire Naturelle (MNHN) in 2018. During this time he took part in various studies about dinosaurs’ limb bones and 3D imaging involving functional morphology, intraspecific morphological variations and retrodeformations. In addition Romain enjoyed volunteering activities including palaeontological fieldwork and outreach with audiences from all ages and backgrounds.

His enthusiasm for the study of the functional morphology of extinct archosaurs led him to join the DAWNDINOS team for his PhD, co-supervised by Prof. John. R. Hutchinson and Dr. Alexandra Houssaye from the GRAVIBONE project at MNHN/CNRS. Romain will be studying the internal and external structure of long bones among dinosaurs and their cousins in relation to their posture.

The first part of his PhD will be spent working as a Research Assistant within the DAWNDINOS team to study the limb bones inner and outer adaptations to postural changes among early archosaurs.

Oliver is a scientific illustrator and palaeobiologist. During his undergraduate studies in Scientific Visualization at the Zurich University of the Arts, his passion for palaeontology led him to pursue internships in the lab of Dr. David Evans at the Royal Ontario Musuem in Toronto, Canada and the lab of Dr. Octávio Mateus in Lourinhã, Portugal. From these experiences, Oliver developed a special interest in biomechanics and 3D computational modelling.

After obtaining his BA in Design from Zurich in 2017, he joined the Nyakatura Lab at the Humboldt-Universität zu Berlin as a research fellow, working on limb biomechanics of extant caimans during locomotion. He completed a MSc in Palaeobiology in 2019 at the University of Bristol, where he was involved in a research project on the limb biomechanics of the stem-archosaur Euparkeria under the supervision of Prof Emily Rayfield and Prof John Hutchinson.

His research interests lie on novel three-dimensional computational modelling techniques to reconstruct deformed and partially preserved specimens, as well as musculoskeletal modelling of extinct and extant archosaurs, and the study of their biomechanics and locomotion.

In addition to his art and research Oliver enjoys palaeontological fieldwork. He joined the Royal Ontario Museum and the Cleveland Museum of Natural History in the last few years for their combined field excavations, the Southern Alberta Dinosaur Project, helping uncovering 77 million year old dinosaur remains in the Oldman Formation.