As you may know if you have done the previous DAWNDINOS activities, archosaurs are characterised by their wide diversity of limb postures. In addition to walking either on two or four legs, some were adapted to support their weight on robust limbs (graviportal) whereas other were adapted to run and perform agile, economical movements on slender limbs (cursorial).

It is possible to acknowledge these anatomical differences by observing the difference of shape between leg bones of graviportal and cursorial archosaurs. But first, what is shape? Well, in scientific language, the biological shape of a bone is defined like this:

In fact, in order to compare the biological shape of the leg bones of two different size animals, we can scale one leg (and its bones) to match the size of the other one. That way, we can focus only on the actual differences in morphologies between two animals or more and compare differences of proportion between the three leg segments: thigh, calf and foot. So, we are going to try it using two relevant examples from the DAWNDINOS project: the quadrupedal armoured pseudosuchian (aetosaur) Typothorax and the small bipedal dinosauriform (“protodinosaur”) Marasuchus.

Left hindlimbs shown in side view here and throughout: 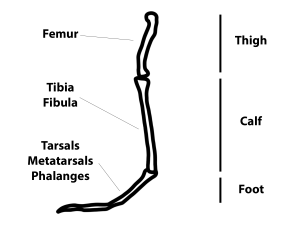 Your task is to reproduce these two legs on tracing paper; or print the images.

Do not forget! You are a skilled palaeontologist who knows that Marasuchus walked directly on its toes (“digitigrade”; like birds) whereas Typothorax walked flat-footed on its heels and toes (“plantigrade”; like humans); see below for more about this. Thus, the third point “Back of the heel” seems substantially different between the two legs. 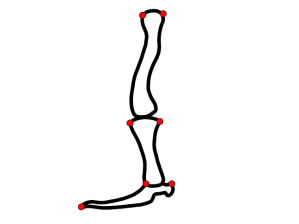 Once it is done, you can make the most out of your tracing and superimpose the two legs to observe the many differences between them. 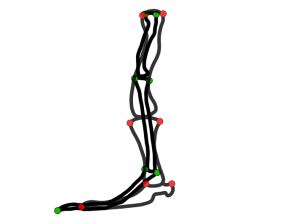 Fig.5, Superimposition of the two legs

You can check skeletons of lions and elephants if you would like to see a modern example of this observation. 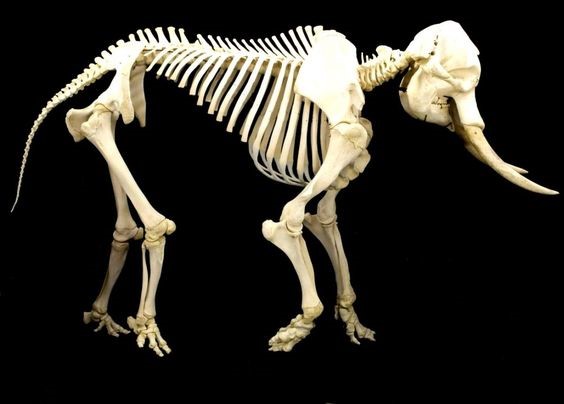 As stated above, you can also observe how the point arrangement is different in the foot region between the two archosaurs. Like lions, early dinosaurs stood and moved on “tip toe” as birds still do; this is called a digitigrade foot posture, seen in Marasuchus. Like humans and elephants, early archosaurs and most crocodile-lineage animals stood and moved on “flat foot” (including their heels); this is called a plantigrade foot posture, seen in Typothorax. This postural difference between digitigrades and plantigrades is often observed between animals that are rather agile or adapted to bear their weight. Again, lions and elephants are good modern examples of digitigrade and (functionally) plantigrade feet. Being digitigrade– or in the case of many hoofed animals, unguligrade (standing on the very tips of toes only!)– lengthens the limbs, allowing longer strides.

Now, you can try it again with other DAWNDINOS archosaurs like Batrachotomus and Heterodontosaurus. And if you feel like you are up to the challenge, why not try this method with a Tyrannosaurus and a Diplodocus?

Don’t forget to send your drawings to the DAWNDINOS project at lkermode@rvc.ac.uk and you will receive a cool DAWNDINOS sticker!

Typothorax and Marasuchus: adapted from Scott Hartman 2016a ; 2016b

You can also learn more about graviportal animals by following the GRAVIBONE project.